Did you know, millions of parents are not able to read and teach stories to their children in their own mother tongue due to the lack of access to resources.

These days, more and more indigenous languages spoken by small Ethnic groups are being lost.

Most developing countries are putting an emphasis on education, and real effort as well as progress has been made to enable that all children to go to school.

Typically, learning is done in the country’s official language, which connects the children to the global world. However, this is what contributes to Mother Tongue languages  of different ethnic group disappearing.

They are being swallowed up by a bigger, regional or global languages of the dominant group of the country – such as Swahili in Kenya, Bambara in Mali, Fon in Benin – or by Colonial pre-Independence languages of French, English, Spanish or Portuguese.

The fact is that in the developing countries, ‘Mother-Tongue’ languages were never put in writing. This has undoubtedly contributed to the rapid disappearance of those languages.

Together with these tribal languages, we are also losing rich cultures, proverbs, and other unique traditions that offer benefits we may not recognize until it’s too late.

The Mission of NaNetya Foundation is:

1. Enable children around the globe who belong to small ethnic groups to have access, and read, stories in their mother tongue.

Reading stories from a young age in their native Mother-tongue, will strengthen the connection of children to their Traditional Heritage.

2.  We believe, that  by  collecting stories in different Mother-Tongues, particularly in sub-Saharan regions of Africa, the Nenetaya Foundation will contribute to reduce the risk of the disappearance of the stories AND the languages.

We collect stories in mother-tongues from different sources: local teachers and scholars, Elders, Anthropologists, missionaries and so on.

We Get the stories written, edited and paired with illustrations.

All stories are being loaded to this web-site, for the benefit of all readers.

In  few special cases we go one step ahead and print books in the local language. In that case we use two steps: 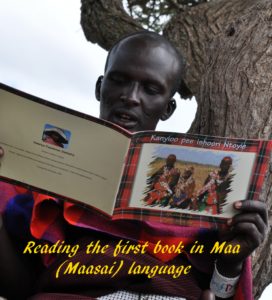 a. Availability – Are there any written books in that groupʼs language?

c. Preparedness – What is the willingness and readiness of members of particular groups to invest financially and intellectually, in reading books.

2. Decision is made regarding which groups are most prepared to benefit from the published books.

In order to keep jobs locally and to employ as many local workers, we are doing our best to print books in the country of distribution.

Sales and Distribution –  Books are subsidized and sold for a small fee. Since in most places there aren’t any book shops, selling is done: on market days, at schools, and by walking from village to village.